Reports are out claiming that Arsenal goalkeeper Petr Cech has hailed his teammate Olivier Giroud for his goalscoring exploits in the 3-0 win over Olympiacos on Wednesday night. 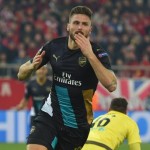 The French international’s hat-trick, his first in a Gunners shirt, made sure the North Londoners qualified for the knockout stages of the Champions League for the 16th consecutive year.

The Czech goalkeeper said of the Frenchman: “He scores goals when we need him.

“He is a real handful when we need to play. What you want from your striker is to score goals and he has been scoring goals which is fantastic.”

There were moments of anxiety for Arsenal fans as Giroud went down with a twisted ankle in the second half when the score was still 1-0 but he shrugged off his injury to come back and score two more goals for Arsene Wenger’s side.

Cech added: “He was saying he would be OK, he just needed a moment because he had a pain in the initial moment but we were positive he would come back. The second goal and the penalty is a great moment for him because he has been absolutely brilliant all season and we needed him because this was a brilliant result. ”