Reports are out claiming that Rio Ferdinand believes Laurent Koscielny, when on song, is the best defender in the Premier League. 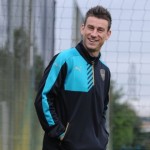 The French international centre-half starred in Arsenal’s 3-0 Champions League win over Olympiacos on Wednesday night and his performance prompted only superlatives from Ferdinand.

The Manchester United great feels that Koscielny rivals Manchester City captain Vincent Kompany for the mantle as the best central defender in the English top flight.

“Koscielny for me, when he’s on form I think he’s the best defender in the league,” he said on BT Sport.