Reports have emerged claiming that Steven Gerrard was full of praise for Aaron Ramsey after he helped Arsenal progress to the knockout stages of the Champions League on Wednesday night. 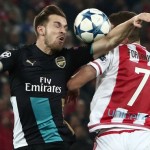 The Wales international played a key role in the centre of midfield for the Gunners in their 3-0 win over Olympiacos and his performance caught the eye of Liverpool great Gerrard who admits he is a big fan of the 24-year-old.

Gerrard said on BT Sport : “I don’t think he’ll be happy playing out wide because he hasn’t got the legs,”.

“His qualities are all in the middle. For me, when he is in that form, he’s the best attacking midfielder in the Premier League so you’ve got to play your best players where they want to be and I’m sure he will want to be in the middle.”

Ramsey pulled the strings for Arsenal as Olivier Giroud scored a hat-trick to see them leapfrog the Greek side into second spot in Group F, achieving a path to the Round of 16 for the 16th straight season.