It has been reported that Manchester United winger Jesse Lingard has urged his side to ignore their critics. 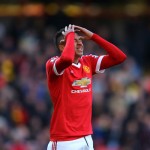 The Premier League giants endured an embarrassing exit from the group stages of the Champions League following the 3-2 defeat at the hands of Wolfsburg at the Volkswagen Arena on Tuesday night.

Unsurprisingly, United have received a lot of criticism from the fans, pundits and the media alike but youngster Lingard feels that the Red Devils have to move on by ignoring all the negativity.

Lingard said: “Playing for Manchester United comes with a lot of pressure. If you’re out of a competition, you’re going to get critics, they’re going to start saying stuff. We’ve got to rise above that as a team, move on and concentrate on the next game.

“We just need to stay positive. We’re creating a lot of chances, we’re just lacking that end product. But we’re working on it and hopefully that will come in the next game.” Man Utd In Advanced Talks With Southampton For Nathaniel Clyne