It has been reported that Manchester United goalkeeper David de Gea is grateful to fans for their support after his on-off move to Real Madrid in August. 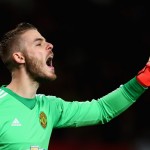 Speaking with United Review, the Spanish international talks about his return to the team and the fans’ reception.

“It was just incredible, the welcome that I received from all the Manchester United fans,” De Gea said.

“It was a special game, a derby against Liverpool, so to have won at home, in that fantastic atmosphere, it was unforgettable! It was amazing. It’s difficult to be able to describe how I felt at that moment, even if I try to. I just want to thank all the fans for the support they’ve always given me since the first day I arrived here. It was just incredible.”

Asked if it was good to be playing again following a summer of speculation, De Gea continues: “Yeah, it was. That was the main thing for me, after the whole summer, getting back to playing again. And coming back to Old Trafford against Liverpool was just perfect!”