It has been reported that Manchester United players are questioning Louis van Gaal’s substitutions for defeat at Champions League opponents Wolfsburg. 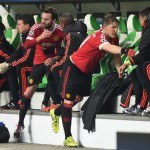 There is resentment among the players over their Dutch manager’s tactics.

And his decision to throw on Powell in Germany – despite the midfielder having spent 16 months out of the first team – is said to have prompted a surprise reaction from United’s stars.

Van Gaal does retain the backing of United’s hierarchy, despite Tuesday’s setback.