It has been reported that Germany coach Joachim Low says Bastian Schweinsteiger will prove himself at Manchester United. 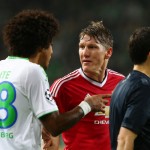 United manager Louis van Gaal suggested Schweinsteiger under-performed during his side’s Champions League defeat to Wolfsburg on Tuesday evening, and that is why he was substituted.

“We at the German Football Association know what we are getting with Bastian,” Low told the Bild newspaper.

“He’s still a world-class player and undisputedly our captain.”

According to Low, the 31-year-old former Bayern Munich midfielder still needs time to get used to a different style of play, and a different league having spent all of his career up until the summer in the Bundesliga.

“You’ve got to give even an experienced player like him time to adapt to a new league,” Low said. “I am sure that Manchester United are still going to get a lot of joy out of Schweinsteiger.”