Reports are out claiming that Arsenal striker Joel Campbell is delighted to be proving himself after their Champions League win at Olympiakos. 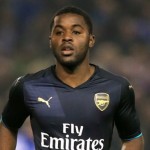 The Costa Rica international is one of a number of players being given an extended run due to Arsenal’s extensive injury problems.

And he hailed the fringe men for delivering when it mattered.

“It was important for the rest of the players to step up and take more responsibility,” Campbell said.

“In a way, we played for them tonight and hope to have them with us in the next stages of the competition.”

Campbell impressed against his former loan club and thanked the Greek fans for their welcome.

“I am very happy to be back,” he added. “I am grateful to the fans of Olympiakos for their friendliness and warm reaction towards me, it was very touching.”

Arsenal Ready to Bring Kaka to the Emirates