Reports are out claiming that Barcelona president Josep Maria Bartomeu has admitted that they are defenseless against more raids on their academy from the likes of Arsenal or Chelsea. 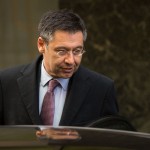 Several leading Spanish players have found their big break in the Premier League after being lured over to England.

Whilst Barcelona have spent tens of millions bringing Cesc Fabregas and Gerard Pique back to the club Bartomeu accepts that there is nothing the club can do to keep their youngsters away from the riches of their new “rival”.

“Our rival is the Premier League,” he told the Financial Times.

“It is not a specific club, it is the strength of the Premier League itself.

“The 16 year olds constantly receive offers from the Premier League that are very tempting. Every year there are some who go.”