Reports are out claiming that Arsenal boss Arsene Wenger says Olivier Giroud is crucial to their plans this season. 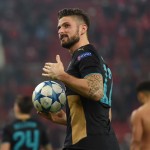 Wenger feels that the French international striker does not get enough credit he deserves, but says he offers something vital to the Arsenal team.

“If you go on counter-attack of course he is not the kind of player that you want or select first,” the manager said.

“That is why when we played against Bayern, I chose [Theo] Walcott because you know you play more in your own half and you have to go out quickly.

“But when you dominate the game and need presence in the box there is no better player than Olivier. He gives everything in every session, he is not a guy who plays within himself, but he has a good stamina, good power. When you stand next to him as a defender, it is difficult to get in front of him because he is very strong.”