It has been reported that Arsenal are moving for Palmeiras striker Gabriel Jesus. 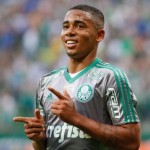 Calcionews24 says Gunners chiefs have been in touch with the 18-year-old’s representatives and will meet their Palmeiras counterparts next week to thrash out a deal.

Jesus broke into the Palmeiras first team this season and has bagged four goals in 20 appearances.

He has represented Brazil at under-23 level and is capable of playing anywhere along the front line.

Jesus, who scored 37 times in 22 matches at youth level last season, is under contract until 2019.