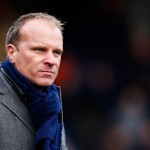 Reports are out claiming that Swansea City are targeting Arsenal legend Dennis Bergkamp for their manager’s job.

The Daily Mail reported that they have sounded out the Arsenal legend about coming to the Liberty Stadium.

Swansea are believed to still be keen on convincing the former striker to step into the vacancy caused by Monk’s sacking on Wednesday.

The post has attracted significant interest, but the prospects of an appointment before late next week appear increasingly slim. Club stalwart Alan Curtis will lead the team against Manchester City today.