It has been revealed that Arsenal boss Arsene Wenger won’t rule out buying in January. 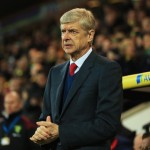 Wenger says, however, that adding to his squad midseason isn’t a priority.

“I will go out there and see what we can do but at the moment we have a whole December to go in a good position in the Premier League.

“So it is important for me that we don’t lose more payers because we are short and that everybody contributes fully, like we did on Saturday and Wednesday, and have that consistency in January.”