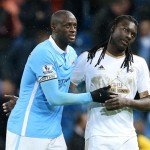 Pellegrini felt Toure was City’s outstanding player. The Ivorian provided energy and drive throughout and it was his determination that brought about the winner.

Pellegrini said: “I think Yaya was one of the best players in this game. In the first half and the second he was the player who tried to create different things.

“But the most important thing is we won. It doesn’t matter if it is Yaya’s goal or Kelechi’s goal.”