Reports are out claiming that Arsenal midfielder Aaron Ramsey feels that this could be the Gunners’ year in the Premier League. 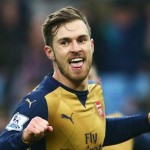 The North Londoners climbed to the top of the table after claiming a 2-0 win over Aston Villa on Sunday and Ramsey believes that they can kick on and win the league this campaign, ending a 12-year wait.

After scoring in the win at Villa, Ramsey told Sky Sports: “We believe we have an opportunity to win the title.

“We have shown what we are capable of and have to continue now, in what is a busy part of the season.

“We have to maintain our focus and belief. Who knows what will happen but we believe we can challenge for trophies.”