It has been reported that Premier League clubs are keeping tabs on Martin Odegaard’s situation at Real Madrid. 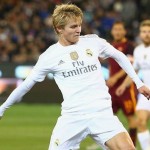 But Don Balon says the move has turned sour, with Odegaard feeling his career is now ‘stagnating’.

The situation isn’t at breaking point, but it will mean the intervention of Real president Florentino Perez as Odegaard’s minders are sounded out by Premier League intermediaries.

Jurgen Klopp, the Liverpool manager, is a big fan of the teen and tried to sign him for Borussia Dortmund last year.

At the Reds and United, representatives can highlight their commitment to youth this season – which is sure to turn the head of Odegaard.