Reports are out claiming that Aaron Ramsey believes Arsenal’s place at the head of the Premier League table has piled the pressure on their title rivals. 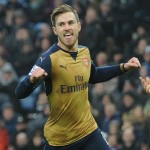 The Gunners have lost just one of their last 10 League matches and Ramsey believes their consistency will cause problems for the other title contenders.

“It’s obviously nice to top the table — it does put that pressure on for other teams,” Ramsey told Standard Sport.

“But it’s a busy period and we have to remain consistent through that and see where we are in the New Year. I hope we’ll get better now.

“It was nice to win and finish off what’s been a very successful week for us.

“We settled down after getting an early goal and showed what we could do.

“I believe there are a lot more teams now capable of taking points off each other. We’ve been shown that this season with some of the results.

“But it’s important for us to look after ourselves and get through this busy period and see where we are in January.” Ex-Arsenal Star Insists Advocaat Simply Has To Keep Sunderland Up