Barcelona chief Robert Fernandez has revealed that they are happy with their Champions League tie against Arsenal. 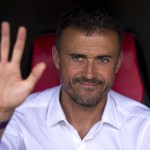 The two clubs have been paired for the last 16.

“The tie is going to be open and very tough,” said Fernandez.

“We have to be very sharp in the first game. It is vital to get a good result there,” he said, while recalling the similar styles of football played by Barça and Arsenal. “Their philosophy is like ours.”