It has been reported that Real Madrid are exploring the prospect of buying back Mesut Ozil from Arsenal. 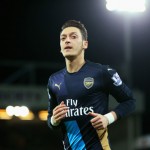 According to reports from Don Balon, Real Madrid are weighing up a move for the German international playmaker.

The Spanish side are reportedly keen to re-sign Ozil as a replacement for James Rodriguez, who thought to want a move away from the Bernabeu.

Madrid sold the German international to Arsenal in the summer of 2013 for £42.4m but his superb form has caught to eye of Real.

However, with Arsenal reportedly talking about a new five-and-a-half-year contract with the player, Arsene Wenger will not want to lose him to Real.