Reports are out claiming that FC Midtjylland midfielder Kristoffer Olsson feels he was poorly treated at Arsenal by Arsene Wenger. 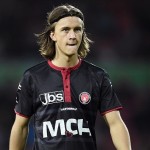 Olsson, speaking with the Lundh podcast, felt misled by the Gunners manager during his time at London Colney.

“Before I left for the summer, I had a really good training match, with a mixture of Under-21 players and the A team. Arsène Wenger had said that it was for the young to take the chance and I felt I did.

“Then I felt it was going to happen for me, but then after that, we went to a training camp in New York and I was one of the under-21 players who played the least. Then it felt like I was far from the A-team and so I went on loan.

“That’s what disturbed me at Arsenal. That there was someone who did the talking. It was more that they showed it instead. Maybe it is more typically Nordic or Swedish that you have more contact with the coach.

“Wenger has a lot to do with the management of the club, but I think it would have been better if in preseason he said ‘you are far away and its better you go on loan’ because I still thought I had the chance to play.” Yoann Gourcuff : I’m Flattered By The Interest Of Arsene Wenger