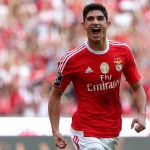 Reports have emerged claiming that Manchester United have joined Chelsea and Arsenal in the race to sign Goncalo Guedes.

The Portuguese international has set Europe alight with a host of quality performances for Benfica after managing four goals as well as four assists in nineteen appearances so far this season.

The fine performances have led to the 19-year-old winger being courted by a host of top clubs around Europe and now according to reports from the Daily Star, United have joined the likes of Chelsea and Arsenal in the race to acquire his services in January.

David Moyes To Gamble With Team Selection For Fulham Clash