Reports are out claiming that AS Monaco have launched a bid for Lazio striker Keita Balde Diao. 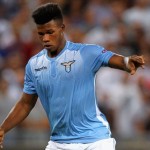 TMW claims that ASM have offered €15 million for the young forward, who they hope to bring to France in the first days of the New Year.

Monaco coach Leonardo Jardim is willing to send Stephan El Shaarawy back to parent club AC Milan and replace him with Keita.

Keita is unsettled in Rome after a tough season. He’s managed just two goals so far this campaign.

Monaco hope to do business in the coming days, though Lazio president Claudio Lotito is sure to drive a hard bargain.

Premier League clubs Arsenal and Liverpool are also said to be interested in the 20 year old.