According to reports from the London Evening Standard, Alex Oxlade-Chamberlain has made a plea to Arsene Wenger for further opportunities in central midfield amid Arsenal’s latest injury crisis. 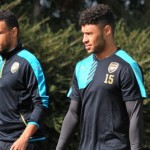 The 22-year-old has predominantly been used on the right wing since joining the club in 2011, but has faced battles with other players and his own injuries to nail down a spot in the starting XI.

The England international would like to be given a chance in the position, one he played in regularly during his youth career.

“I’m quite lucky because I enjoy playing on the wing and in midfield as well,” he told the Arsenal weekly podcast.

“I’ve become more used to playing on the wing because I’ve played there more than I have in the middle. Growing up, I played more centrally which is why whenever I do get asked to play there, I’m more than happy to do that.

“There are times in the game as well when, because of the way the team plays, I might be on the wing but for a 10-minute period I might end up playing in midfield and I feel at home doing that.

“Sometimes it’s nicer to play in midfield because you get more of the ball whereas when you’re out wide you rely on people to get you the ball, but then when you are on the wing you have then license to attack a bit more and run at people which is a strong part of my game. I’m happy to play in both positions.”

However he believes his ability to fill in across a formation will serve him and Arsenal well.

“Versatility is an extra string to a player’s bow,” he continued. “In the long run it’s probably better to tie yourself down to one position and really become established in one area to be as good as you can in that position.