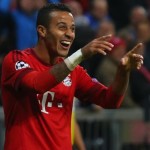 It has been reported that Bayern Munich midfielder Thiago Alcantara has revealed Manchester United shot-stopper David De Gea once tried to lure him to Old Trafford.

In an interview with the Daily Mail, Alcantara explained Spain teammate De Gea attempted to convince him to join the Red Devils following his departure from Barcelona in the summer of 2013.

“There was never any firm proposal,” Alcantara said.

“David de Gea wanted me to join. He wrote a message on my match ball after we’d beaten Italy in the final [of the European U-21 Championships]. But I’d have done the same with him.

“He is one of the greatest goalkeepers in the world. You always want to play with the best. But it was always going to be Munich.”

Ryan Giggs : Manchester United Must Be Wary Of David Beckham