Reports are out claiming that Premier League clubs are circling Real Madrid for Isco. 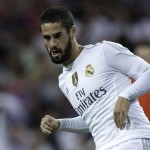 Isco, says The Sun, is a January target for Arsenal boss Arsene Wenger, who is prepared to pay big for the Spain international.

City could have the inside-running, with manager Manuel Pellegrini working with Isco at Malaga and the midfielder touring the Etihad before signing for Real.

Isco has one foot out of the Santiago Bernabeu after mocking coach Rafa Benitez’s team selection on Sunday at Villarreal.

Isco played up to the TV cameras his shock at the benching of teammate Toni Kroos in clear challenge to Benitez’s authority.

It’s no secret City are seeking a long-term successor for David Silva and Isco fits the bill.