Reports have emerged claiming that Watford are reportedly close to negotiating a deal for AS Roma winger Juan Manuel Iturbe. 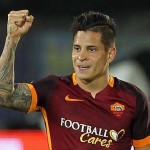 Italian publication GianlucaDiMarzio.com is reporting the Argentine is favouring a move to the Premier League outfit, despite interest from a host of Serie A clubs including Bologna, Genoa, Sassuolo, Hellas Verona and AC Milan.

It is understood Iturbe is unhappy with the limited number of first team opportunities he is receiving in Rome and is keen to test himself in the Premier League.

Spurs Midfielder Sandro Not Interested In AS Roma Switch