Reports are out claiming that former Arsenal defender Sol Campbell believes this season is the Gunners’ best chance of winning the Premier League title since the club’s last league triumph over a decade ago. 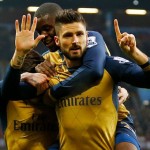 “I’d love them to do it but I don’t like tipping people too early,” Campbell told 888sport.com.

“But if they are going to have a chance to win it’s definitely going to be this year. Sometimes opportunity knocks and they are responding. The best chance they’ve got is this year.