It has been reported that Manchester United are looking at ways to overhaul their youth academy structure in a bid to bring more promising talent through the ranks. 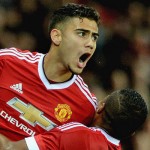 According to a report from the Daily Mail, United are determined to bridge the gap with the modernised Manchester City Elite Development Squad youth model which has achieved more success in recent times.

It is believed that plans are in place to give more assistance to U19 boss Nicky Butt following the team’s failure in the UEFA Youth League this season, which saw City top their group.

The City Football Academy has been dominant over United this season with September’s various age group meetings producing just one win for the Red Devils.

United are being outmuscled by City’s spending and are beginning to lose coaching and scouting staff to their neighbours which has struck fear into the Carrington academy.

The Red Devils have also been alerted to the fact that the sons of Robin van Persie and Phil Neville have also pledged allegiances to the City academy rather than developing their game with United.

It is understood that United will undertake a ‘root and branch’ review over the next 12 months in a bid to improve the club at youth and grassroots level.