It has been revealed that Manchester United skipper Wayne Rooney is expected to make a comeback from his injury in Saturday’s clash against Norwich City. 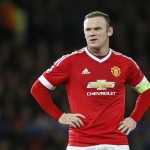 The 30-year-old England international has been missing in action since picking up an ankle injury in the 1-1 draw against Leicester City last month.

Rooney missed games against West Ham United, Wolfsburg and Bournemouth due to the injury but according to the Manchester Evening News, could be back when the Canaries come to Old Trafford on the weekend.

His return will be a welcome boost for Louis Van Gaal’s side, who have failed to register a win their last five games in all competitions.