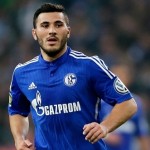 The Schalke defender is being heavily linked with a January move to Italian club AS Roma but his representative Gordon Stipic-Wipfler has revealed that there is much more interest than just that of the Giallorossi.

Stipic-Wipfler also suggested that the 22-year-old Serbian left-back would become available this winter for a fee of around £5.8million.

“I think Kolasinac will leave Schalke in January but do not know where he will go yet,” he told La Roma.

“Rome is a fantastic club and the fans wonderful, is one of the biggest clubs in Europe and then followed with attention the player also last summer.

“We must say there are also great Premier League clubs such as Manchester City who are watching. The player is doing very well in recent times and last week was elected man of the match in the encounter with Schalke in the Bundesliga.

“He would cost about €8m [£5.8m]. But I think it is possible that he could initially move on loan with a buy-out option.”