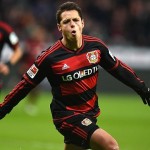 Reports are out claiming that Arsenal are weighing up a shock move for Bayer Leverkusen striker Javier Hernandez.

Don Balon reported that the Gunners have made Chicharito their No.1 target for next month’s window.

The Mexican international has scored an impressive 18 goals for Bayer Leverkusen since joining the German club from Manchester United at the end of August.

However, the 27-year-old’s stay in the Bundesliga could end up being a short one if the Gunners lodge a concrete bid for his services.

Mesut Ozil Eager To Prove Himself In The Premier League