Reports are out claiming that Manchester City playmaker David Silva has stressed the importance of his side claiming a victory over Arsenal this weekend. 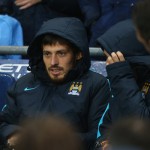 The Spanish international is looking forward to the game against Arsenal and has emphasized the importance of his side claiming the three points at North London, in the context of the title race.

Silva said: “It would be very important to beat Arsenal – they are a direct rival. It would be fantastic to beat them and start a good amount of games that we win.

“It will be very difficult – we have seen this season any team can beat any other team – but it will be good to start a good run of form and finish strongly this season.

“We are in the fight for all competitions at the moment and we are obviously hoping to get all the players back from injury and finish the season strong.”