It has been reported that the agent of Barcelona attacker Arda Turan has revealed Manchester United wanted him last summer. 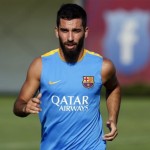 Turan wrote off six months of his career to move from Atletico Madrid to Barcelona in July and will only be allowed to play for the Catalan club next month, when Barca’s transfer ban is lifted.

“Last season Manchester United made a bid for Arda but Atletico Madrid did not want him to leave,” Turan’s agent, Ahmet Bulut, told AMK , who kept his talks with Barcelona secret.

“I was in talks with Barcelona but told nobody about it at the time.”