It has been revealed that Norwich go into Saturday’s match at Manchester United in the relegation zone, having won only one of their last 10 Premier League matches. 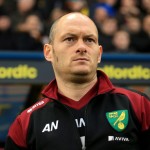 Meanwhile, United have failed to win in their last five matches in all competitions, but still sit fourth in the top flight.

“They’re not as free-flowing or maybe as entertaining in terms of goals and things like that as they once were, but they’re a hard team to beat,” said boss Alex Neil.

“They don’t lose many games or many goals.

“All these games are tough, but they’re Manchester United, they’re four points off the top of the league so I wouldn’t like to suggest they’re not doing well.

“I don’t think they’re as formidable as they once were. I think they’re a team in transition at the moment and we’ll be looking to take advantage of that.”