Reports are out claiming that PSG are interested in Arsenal fullback Mathieu Debuchy. 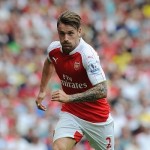 The French international defender has made it no secret he will seek a move in January after failing to secure regular first team football.

Debuchy told RMC: “I will study the proposals. I love England but why not go back to France?

“This summer, Arsene Wenger told me we would talk if I was not happy in December.”