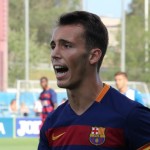 Reports are out claiming that Arsenal are in pursuit of Barcelona starlet Alex Grimaldo.

It is believed that the Gunners are pondering a January move for the 20-year-old left-back who captains Barcelona’s B team.

Spain U21 international Grimaldo is also a target for Bayern Munich, Porto and Benfica but Arsenal are now credited with a considerable interest.

Despite having Nacho Monreal and Kieran Gibbs as options at left-back, Arsene Wenger is looking to the future and reportedly sees Grimaldo as a long-term choice.