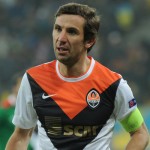 Reports are out claiming that Arsenal boss Arsene Wenger is shopping for a new fullback next month.

Izvestia claims that Wenger has gone cold on Dynamo Moscow striker Alexander Kokorin as he wants to focus on a new fullback signing in January.

Any move for the Croatia international is expected to see Mathieu Debuchy move on.

The France fullback has made it no secret he expected to be playing more with Arsenal this season.