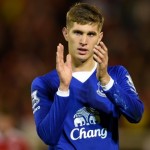 Reports are out claiming that Manchester United legend Rio Ferdinand is a big fan of Everton defender John Stones.

“I’d get him regardless of how much it costs,” said Ferdinand. “He’s the best young centre-half around at the moment, and he’ll be around for the next 10 years.

“I wouldn’t look at anybody else, to be fair. If he went to another club in England I wouldn’t be able to believe it.”

The England international defender is also wanted by Arsenal and Chelsea.