Reports are out claiming that Norwich City boss Alex Neil says they were deserved winners at Manchester United. 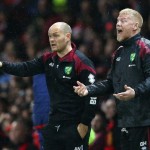 United were caught out by breakaway goals from Cameron Jerome and Alex Tettey either side of half-time.

Anthony Martial pulled one back as United rallied in the closing stages but it was not enough.

Norwich’s victory – their first at Old Trafford since 1989 – lifted them out of the relegation zone and manager Alex Neil felt it was thoroughly deserved.

He said: “One thing about Louis van Gaal’s teams is they start quick. They press you high up the park and are really in your face.

“You need to make sure after 30 minutes you are in the game and then the game will become bigger and it gives you the opportunity to pick up wee pockets and try to hurt them on the counter. That is what ended up happening.

“I thought the players’ work ethic was incredible. Many a team have come away from home against bigger sides and sat behind the ball and ended up being done by four or five.

“But we limited them to very little at times and posed a threat on the break. We showed good quality in certain areas on the pitch.

“I wanted it so badly for them and I thought we deserved it. I’m really pleased.”