It has been reported that Thomas Muller has ended talk of a move to Manchester United by signing a new Bayern Munich contract. 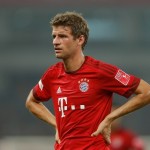 Bayern have extended the contracts of Muller, Jerome Boateng and Javi Martinez to 2021 and veteran Xabi Alonso has added a year to his deal, the German champions said on Friday.

With coach Pep Guardiola set to depart for the Premier League at the end of the season, the contract extensions were a signal of strength for Bayern.

“We are delighted to have signed long-term deals with these important players,” club CEO Karl-Heinz Rummenigge said in a statement.

“Thomas, Jerome and Javi know how to win titles and the Champions League as well. With them the team maintains its quality and stability in the long term.”