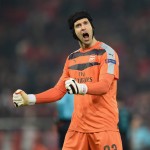 Cech already has 11 clean sheets in all competitions – another on Monday would surpass David James’ Premier League record of 169.

“Petr Cech has done it all, you know. He gives you an aura, a charisma,” Wenger said.

“He’s always important in the big games for players. You look around you in the dressing room and you think ‘are we strong enough?’ and these kind of faces help you believe it.

“He has brought his experience, calm and leadership. He’s good, highly focused. What I say could be a bit detrimental to [David] Ospina, but I don’t want to be because he was exceptional last year.

“I must say I met him before he signed, we had a long discussion about the game, the job and his position. I was deeply impressed by his knowledge, by his professionalism and his detail. Since I have not been surprised because I got the whole package in one go.”