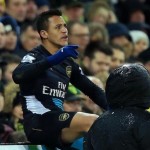 Reports are out claiming that former Arsenal striker Charlie Nicholas has urged Arsene Wenger not to gamble with Alexis Sanchez’s fitness.

Nicholas, who made over 150 appearances for the Gunners, believes Wenger would be foolish to risk the forward against Manchester City.

“With Sanchez on the verge of coming back, if he’s not 100 per cent I would not risk him,” he said, speaking on Sky Sports News HQ.

“I would keep Walcott in the team.” Arsenal’s Mathieu Flamini On The Brink Of Joining Galatasaray