Reports are out claiming that Arsenal fullback Hector Bellerin admits family members want him to return to Barcelona. 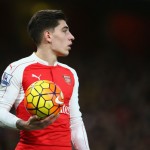 The flying Spanish full-back left Barca for the Emirates back in 2011 after spending right years in the Catalan giant’s famed academy.

But in the Champions League next year, Bellerin will finally make his bow at the Nou Camp – but wearing an Arsenal shirt.

He told The Sun: “It’s been a crazy week. After the draw, my grandma called and said her dream was to see me in the Nou Camp.

“She told me: ‘It will be good, but you are going to do it in a different shirt!'”