Reports are out claiming that Southampton No2 Erwin Koeman has made a personal check on Birmingham City winger Demarai Gray. 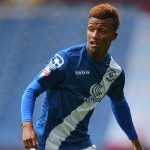 Southampton boss Ronald Koeman sent his brother Erwin to make a personal check on Gray in the 1-1 draw at Preston in midweek, says the People.

England Under-20 international Gray did not get on the score-sheet but Koeman is clearly serious about signing the youngster.

Bournemouth have already had a £5million bid rejected.