It has been reported that Manchester United boss Louis van Gaal says it was his idea for Ryan Giggs to visit the touchline during defeat to Norwich City. 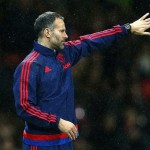 Van Gaal remained in his seat on the bench during the 2-1 defeat at Old Trafford leaving his assistant Giggs to pass on instructions to the players.

But the Dutchman insists the move only signified that he wasn’t happy with the way the game was going – and he insisted Giggs spent the second half on the sideline with his blessing.

He said: “In the last match he had a lot of time on the touchline. He has to give the advice to the players. He can do that because we speak about that.

“You are at the sideline when it is not going well. And that’s the reason.”