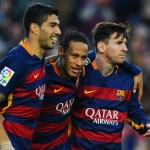 Messi, Neymar and Suarez have scored 52 goals between them in all competitions so far.

“But as a player I look forward to encounters like this. For me it is important to have these big games, it’s nice to play against the best teams; to compete with them is a big opportunity for us.

“We respect Barcelona but they will respect us too. We are not afraid of Barcelona. We just need to play our game and we can beat them. There is no fear. In football everything’s possible.

“It is a tough match but I don’t think our defenders were afraid after the draw. It’s a big opportunity for them to prove themselves against the best attack in the world, players like Suarez, Messi, Neymar.

“It will be an exciting game, with the possibility of lots of goals, but it’s not like we are afraid.”

Villa : I Am Aware Of Barcelona Rumours