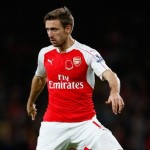 Reports are out claiming that three Arsenal players have found themselves in the CIES Football Observatory team of 2015, giving the Gunners more representatives than any side in Europe, reports the London Evening Standard.

Mesut Ozil, Santi Cazorla and Nacho Monreal were all rated the best performers in their positions over the calendar year by the CIES, an independent study centre in Switzerland who analysed the performances of every player in Europe’s top five leagues that played over 2,250 minutes to create a list of the star performers in each position.