Reports have emerged claiming that Sky Sports pundit Thierry Henry said that Arsenal were most unlike Arsenal of recent times in their 2-1 win over Manchester City at the Emirates Stadium on Monday night. 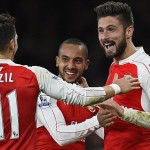 The Arsenal legend also pointed out that the Gunners’ performance in the win showed how much they have matured over the last few years.

“In the beginning, they were very passive. You could see (Mesut) Ozil and (Olivier) Giroud getting frustrated with the team because they were not pushing up with them.

“But the next thing you know, from the chance that [Kevin] De Bruyne missed, they find themselves 2-0 up. A year ago they would have been losing that game.