Reports are out claiming that Manchester City ace Sergio Aguero is on PSG’s marquee shopping list. 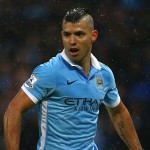 PSG have drawn up a shortlist of big names as they prepare to lose Zlatan Ibrahimovic at season’s end.

High on the agenda, says Le Parisien, is Aguero.

However, the Argentine stated only on Sunday that he was happy at City.