It has been revealed that Jose Mourinho is willing to take a massive cut on his wages to land the Manchester United job. 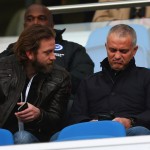 The Daily Star says he is willing to take a £16m pay cut to become United manager.

Mourinho is waiting in the wings following his sacking by Chelsea last week and is prepared to accept a four-year deal worth around £6m-a-season to succeed Louis van Gaal.

He was the highest paid boss in the Premier League at Stamford Bridge, where he earned a staggering £10m-a-year.

A source said: “Jose is making no secret of how keen he is to take charge of United if the job becomes available.

“It is not about the money. Managing United has always been one of his ambitions because of the prestige and history associated with the club.

“He knows it would be a huge challenge, but he loves working in English football and would take a wage cut if it meant getting the chance to make United great again.”